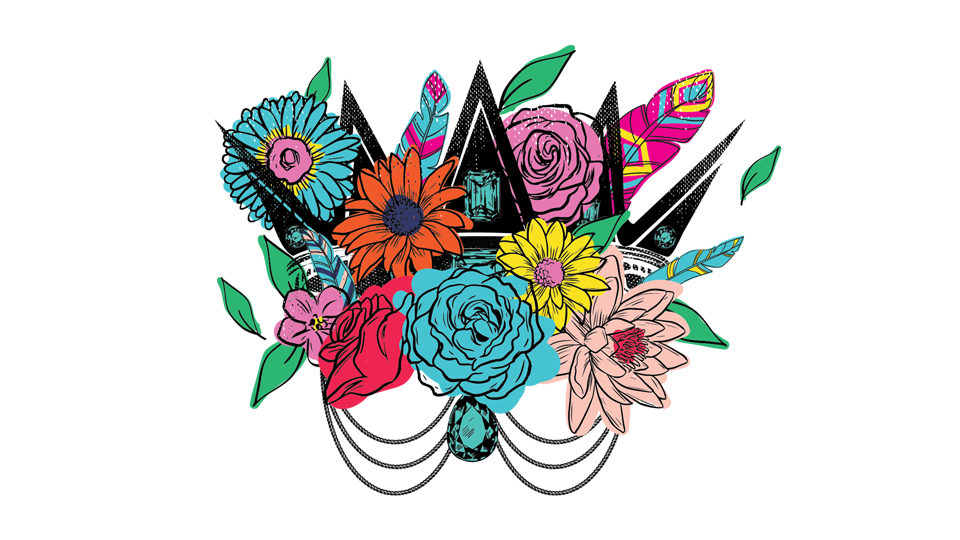 Constance Hall is a top Australian blogger, self-proclaimed freedom fighter and queen lover. She is the best selling self-published author of her memoir, ‘Like a Queen’. Following the release of her viral “parent-sex” post in January 2016, she was catapulted into the public eye. Her post chalked up more than 160,000 likes and was shared more than 38,000 times. Constance fiercely loves her audience and women in general, who she affectionately refers to as Queens.

Following the massive success of the initial launch of the book ‘Like a Queen’, we were approached to develop a new crown identity for Constance’s brand. We were required to embody all the elements of her vision and personal style. The brief was creative, artistic, whimsical, cutting edge and colourful – much like Constance herself. Following an extensive research, conceptual and development process, a variety of elements were included: native colourful flowers, mexican inspired feathers, ornate dripping jewels, green foliage and a striking bejewelled crown.

The crown identity was then printed on clear stickers to be included as a gift with each book purchase. Late in 2016, we were also invited to design the limited edition ‘Merry Christmas Queenie’ card. This was sold together with the stickers as a pack on her website www.likeaqueen.com.au (now sold out).

This project strayed from our usual corporate repertoire of work, and allowed us to explore colour, creativity and art at a raw and explorative level. It pushed us to develop ideas outside our comfort zones, and for that we are grateful. We are thrilled that Constance and her queens are happy with the result – so much so that it has since been tattooed on some of her queens’ bodies. We really couldn’t ask for a bigger compliment than that.